Last night we held TTT’s official Big Launch party to celebrate the “Unleashing” of the group in Tooting. The Unleashing is intended to mark the point of step change for taking responsibility and looking at what we can do now to make a difference in how we live our lives. 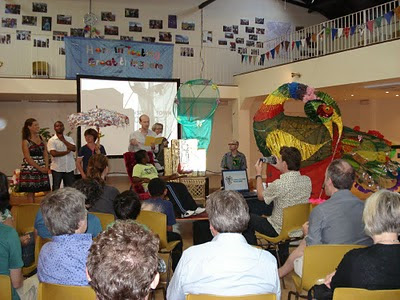 A good turnout of people gathered at the Samaj Hall in Tooting Broadway to celebrate this turning point. The venue was decked out in colourful home made bunting, banners, photographs, old maps and a 3 metre high model of our Sankofa bird made entirely from recycled plastic bags!

At the start of the evening people were directed upstairs to the gallery to view photographs and posters of the many events that Transition Town Tooting has been involved with since the movement began over two years ago and which culminated in the Trashcatchers Carnival held on the 4th July. 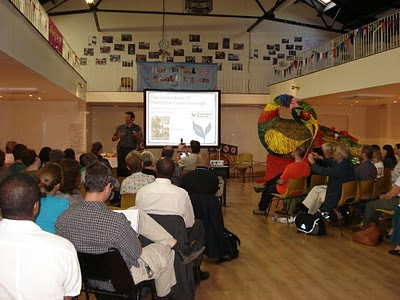 The event began with a mini carnival procession led by artists and carnivalistas from the Trashcatchers Carnival, followed by an introduction and welcome from Lucy Neal, Co-chair of Transition Town Tooting.  The audience then had the chance to see video clips from events organised by Transition Town Tooting over the last two years and hear from local residents, business people and community groups about what they liked and disliked about Tooting. It was very encouraging to hear that most people would change very little about Tooting! 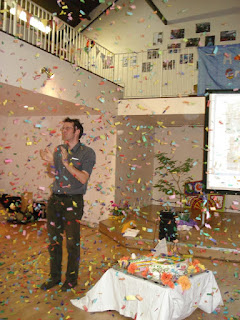 The guest of honour, Rob Hopkins, co-founder of the Transition Network, then gave an enthralling presentation covering peak oil, climate change and the ideas underlying transition.

The Unleashing of Transition Town Tooting was symbolised by the cutting of a giant cake made in the shape of a Sankofa bird and people had the chance to join various action groups including Food, Buildings, Transport, Education, Arts and Energy which are scheduled to meet in the forthcoming months.

Food was provided by Ambala, a local Tooting restaurant, and drinks were donated by Ubuntu, a Tooting made cola, and Moor Organic Juice by James Grieve.  All in all, it was a very successful evening and enjoyed by all those who attended. 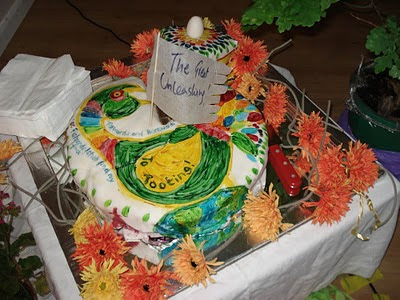