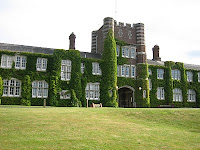 I set off from Tooting early last Friday for a leisurely journey down to Newton Abbott and the 2010 Transition Network Conference. As the train left London, passing through the hills of Berkshire and Wiltshire, and into Devon along the Teign Estuary my expectations and anticipation increased, although tinged with a little apprehension of what to expect (as the Transition movement is still very new to me). 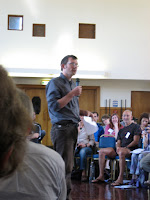 Seale Hayne agricultural college provided a lovely back-drop for the thinking, exploring, discussing, singing and dancing to come. Day 1 proper kicked off with a large welcoming meeting to open the conference and to set up open space sessions – a chance to pool hopes, concerns and ideas for discussion. I was impressed by how quickly a welcoming and respectful tone was set, with plenty of humour mixed in from Rob Hopkins, Peter Lipman and the team.
It’s difficult to capture the flavour of such a packed event, with everyone taking a personal path through the conference, but there were particular highlights and sobering moments which stand out. 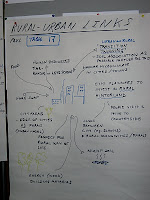 My first session explored local food, pooling many ideas and experiences from around the country: from cooking groups to reskill and seasonal recipe exchanges, to sowing events and patchwork urban farms and orchards – much for TTT to learn from. Continuing this theme I joined a discussion with Paul Sousek, organic farmer and member of Transition Town North Cornwall, on how urban and rural Transition Towns could work together. The group concluded that ‘Transition Twinning’ could bring great opportunities for skills sharing, increasing awareness of food production and consumption and developing food supply links – something I think many will be keen to develop further.

However, there were also sobering notes, reminding us of why we were there and the challenges facing society. Nicole M Foss (http://theautomaticearth.blogspot.com/ ) spoke on ‘Making sense of the financial crisis in the era of Peak Oil’, billed as how Peak Oil and the collapse of global Ponzie finance are a ‘perfect storm’ of converging phenomena that threaten to sink our age of prosperity through wealth destruction, social discontent and global conflict. The talk caused a huge reaction and much discussion throughout the remainder of the conference, not least because it personalised the workings and implications of the (to me) almost incomprehensible global financial system. Shaun Chamberlin has written an excellent summary on the Transition Network website (http://transitionculture.org/2010/06/14/my-conference-shaun-chamberlin-on-stoneleighs-peak-oilfinance-talk/). My mind was similarly overwhelmed by a screening of the Home Project (http://www.youtube.com/user/homeproject), a film of Yann Arthus-Bertrand’s soaring, majestic imagery of the earth from the air overlaid with a chilling narration on the state of the planet. 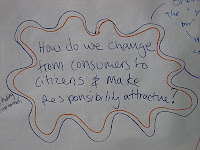 Phew! and a rapid round up of the best of the rest…. Nick Osborne led a fascinating interactive session on facilitating wider cultural and personal changes and communicating with people who may see the Transition movement as ‘too cuddly’. The session drew on Ken Wilbur’s ‘Integral Vision’ (http://integrallife.com/learn ), providing an insight into how understanding different world views can influence how effectively messages on Transition are communicated and projects taken forward.
Another key strand of the conference was the unveiling of a new way of understanding the Transition process. Rob Hopkins explained how as Transition becomes a broader, deeper and more complex model, the 12 Steps are becoming increasingly redundant. He presented a series of around 60 Transition ‘patterns’ or techniques in six broad stages (from where we start from, through ongoing and deepening, to scaling up beyond the community). These will allow groups to pick and choose techniques which suit the characteristics of their group and area. See the draft patterns so far at http://transitionculture.org/2010/06/03/transition-network-conference-2010-booklet-now-available/ . When fully worked up these will form the Transition Handbook 2 due to be published in 2011.
A final closing session (with song about scrambled eggs!) and shared lunch rounded off the 2010 conference and I left feeling I’d soaked up many new ideas, exchanged (my early) knowledge of TTT’s achievements, made new friends, and come away ready to contribute to TTT’s activities over the months to come (including the Carnival, Big Launch and Foodival!).