Two workshops on 21 and 22 April provided lots of lovely ideas for the design of the Tooting Pound.

It’s early days for the community currency but that didn’t stop the heated debates about who should be on the notes – should it be Wolfie (Citizen) Smith or Nurse Edith Cavell on the T£1; Hester Thrale or Samuel Johnson on the T£5 note; an ordinary Tooting mum or an Upper Tooting Road shopkeeper on the T£10; Paul Merton or George Cole on the T£20 note?

The workshops were convened by Sue Rentoul and took place in Sprout, the community arts space on Moyser Road in Furzedown, which proved an excellent venue. Casual visitors to Emma Forrester’s show were also asked for their opinion about what the Tooting Pound could look like.
We have some lively lists full of ideas. But the workshops didn’t stop there: some lovely drawings were created by budding designers and these will all inform the final designs. Here’s one design: 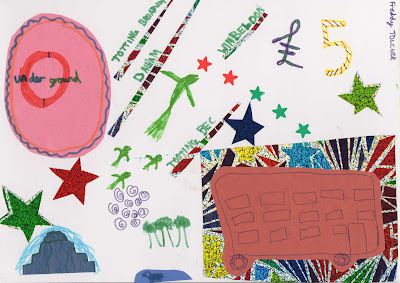 Have a look at the lists of Tooting people, places, objects and animals that participants came up with over the weekend by placing stickers on images, or contributing new ideas:
The most popular Tooting people to depict on the notes were:
• Edith Cavell
• George Eliot
• Citizen Smith
• Paul Merton
• Georgina Weldon
• Hester Thrale
• George Cole
• A local mum
• Samuel Johnson
• A local shopkeeper
Stickers were also put on favourite Tooting places that people would like to see on the notes. Top spots were:
• Tooting Bec Lido doors
• Tooting Common
• Tooting Market
• Tooting Underground
• Bingo Hall interior
• Library
• Harrington’s Pie and Mash shop
• Sprout
• Tooting Police Station
And then there were things, objects and animals:
• A coot on Tooting Common ponds
• Boxes of produce at the market
• The lamp post outside Tooting Broadway tube
• Trashcatchers’ Sankofa Bird
• The bench outside Tesco
• Henna patterns on hands
• Curry
• African printed cloths
• Green Parakeets
You may have ideas of who or what should be on the notes and there will be other workshops coming soon.

One event is on Wednesday 16th May from 6-8pm at 68 Upper Tooting Road SW17 7PB in the pop-up Transition Tooting shop:

‘The Tooting Pound: exploring the idea (and designs) of a local currency with Sue and Tim’
See you there!