An evening meeting in Tooting with James Marriott and Jane Trowell from Platform, the arts and activism group

30 people came out on a chilly eveningto Mushkil Aasaan’s welcoming hall in Tooting – thank you!
The meeting explored how we are all part of the global, regional & local Carbon Web that binds together oil and gas, trade and finance, governments and communities, wellbeing, health and justice, and the past and the future – in hidden and visible ways.

That long sentence describes a complex field where organisations and individuals have strongly-held and divergent views…and we heard some of those views during the evening. For an image of the Carbon Web, see: http://platformlondon.org/about-us/platform-the-carbon-web/TheOil Road book describes in detail one strand of this Carbon Web, delivering oil from Azerbaijan to Europe. 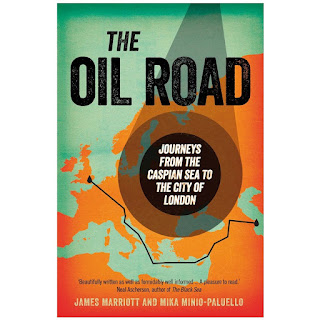 Consumption & Production
James, co-author of the book, took us on a short trip along the route, in reverse – not starting with crude oil production in wells drilled 5km below the Caspian Sea, but beginning with oil consumptionthat some of the audience experienced minutes earlier on a bus on Upper Tooting Rd outside the hall.
We followed the bus fuel’s supply route in reverse – via the road tankers that run at night from Essex to the local bus depot; the ship that brought the fuel to England, maybe from a refinery in the Netherlands; the unrefined oil’s journey by supertanker from Turkey to Italy, and before that by pipeline across 3 countries from the Caspian. All that so we can consume in Wandsworth…

But we don’t produce oil in Wandsworth – do we? Not directly – but we contribute to investments in oil and gas production via our bank accounts, pension plans, insurance, and the investments made with our Council Tax. A tiny fraction of our own wealth is invested in those wells in the Caspian, just as a tiny fraction of the oil we consume here came from those same wells.

The Wandle Delta
Jane took us through Platform’s activities since the 1990s with fellow pioneers here in Wandsworth: peering under the Southside shopping centre built right on top of the river, celebrating the signs of past water and wind power in use all along the Wandle’s length over the past two hundred years.
For more details, see  http://old.platformlondon.org/otherprojects.asp

Shifting the debate
The Carbon Web is powerful.  Reducing dependence on growth driven by fossil fuels needs a challenging vision of different technologies and meanings of growth – which may seem insurmountable.
But as James said, the prospect of a different approach has ‘moved from being a joke to being a possibility’. So, one of the twin gas plants in Bavaria near the end of the ‘Oil Road’ pipeline has been mothballed, because the local take-up of renewable energy has made the plant uneconomic. And nowadays, forty years after it was built, surely there would be no support for burying a living river with a shopping centre.

A ‘managed retreat’ from oil dependence is more possible to envisage and describe now. But there are plenty of hard debates going on – say over coal, and over access to resources by the world’s fastest growing economies. And debate over renewables: Jane said ‘Just because it’s solar, doesn’t mean it’s just’: what are local inhabitants’ rights?

That was just the first 45 minutes of the evening…!

In the remainder of the meeting, we did some mapping in groups: firstly of the ways each of us (yes, even this audience already interested in Transition, or campaigning, or the environment) is linked to the Carbon Web.
We all weave our way through local transport, heating our homes, purchasing food that has been grown, processed, packaged and transported, googling via huge internet server farms, flying ‘love miles’ to see distant family.

We also mapped some of the features of the parallel De-Carbon Web: buying renewable energy for our homes, selecting financial services with transparent investment policies, growing food, driving more slowly and safely, cycling, using shareholder influence to divest from carbon-dependency.

On the TTT site here, scroll down to look at details of our next series of Carbon Conversations, which you can join to explore and take action about your own carbon footprint, with others locally.

And have a look at the Warmer Homes, Lower Bills, Cooler Planet meeting being held in March 21st in the Furzedown Low Carbon Zone – details to follow.

Between us all, we support many different activities here in Wandsworth with many entry points for diverse people to get involved. It was great to host this together.

Thanks to all – to Mushkil Aasaan for the use of the Hall, to the audience who took part, to Lucy for the co-ordination and cake, and to James and Jane from Platform.