In the past fortnight we have hosted two year groups of 50 children each with staff and parents from Gatton School for two special mid-November outdoor learning sessions, Tooting style.

Year Four actively searched the garden’s diverse habitats for minibeasts as part of a curriculum day on the natural world. They found worms, woodlice, centipedes, snails, spiders, beetles, and more.

Year One went step-by-step through an active version of We’re Going on a Bear Hunt – a super experience of literacy, creativity and using their imaginations outdoors.

Year One’s Bear Hunt was thrilling…..
…click below to read on

50 Year 1 childen singing ‘We’re not scared..’ was great to hear. The children walked through the Long Grass, they crossed the Deep River, they dragged themselves through the Mud, they went through the Forest, they battled the Snowstorm…

…and they found the Cave. 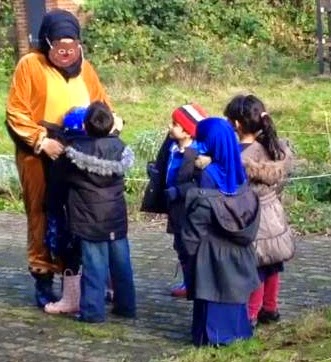 Was the bear real? Some children thought the best thing to do was to hug the bear..and others ran back to the Forest.

How did the visit end?
With more songs, and with snacks of carrots and pears – and all the cores went straight into the compost. Nothing left but footprints and good memories.

It was a privilege to host both year groups in the Community Garden, and to see the children being so adventurous, responsive and positive, and the sessions so creatively prepared.
And if you don’t know the story, click here to see Michael Rosen performing his poem..and try it out yourself.