In 2015 TTT helped facilitate a research project by the University of Westminster all about the impact of urban heatwaves – for the details please see past blog posts by clicking here on Urban Heat.

TTT worked with the researchers and with many local partners in Tooting: voluntary and community groups plus borough-level and statutory bodies.

The funder for this research project is The Joseph Rowntree Foundation, and yesterday TTT took part in a workshop comparing the early research results of three JRF-funded projects.
Each of them explores the links between climate change and UK communities and households. Each aims to give new information to local and national policy makers.
Participants included national bodies such as Public Health England & Defra, & the Cabinet Office, local authorities and universities.

An overall view? That there are synergies of relationships between all the topics outlined below..and that communities with local knowledge and energy have an opportunity to get involved and contribute.

One project is looking at the impact of climate change on UK households’ cost of living between now and 2050.
A valuable prediction so far is that lower-income households will experience the most impact, on part because a larger percentage of their budgets goes on climate change-sensitive expenditure – for example food costs (negative impact because of UK and global events), or energy (a positive impact as winters will be warmer), or repairs after flooding (very negative impact if a low-income household has no insurance).

The second project looks at how to enable climate resilient communities.
The research area covered three towns and villages in a single large rural local authority that spans the Scottish Borders, and a main focus turned out to be the impact of local flooding which was taking place at the end of ’15 as the research groups were meeting.
Flooding is a known risk, is recognised and visible, and has a funding stream with tangible (sometimes debated) results…so gives a definite point of focus to rally around.
Local responses to flooding also led to valuing other aspects of community resilience such as the local ‘creative capital’ – the energy the community can generate to work together in new ways.
Anyone else reminded of ‘Tour de Tooting’ and ‘Rooting in Tooting’?

Thirdly, the Urban Heat project has worked across 3 diverse London boroughs: Tooting, Hounslow and Hackney. Like the Scottish research taking place amidst flooding in Hawick, one of our meetings took place on a day the temperature reached 30 degrees C – designated a risk by the heat health warning system.
Findings include that yes, voluntary groups are interested and understand the impact once they can explore it in depth. So do the borough and other bodies..however the way these two ‘slices’ of the local community can work together is not yet defined. 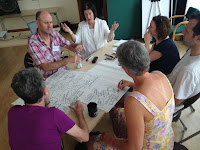 Heatwaves are not perceived in the same way as flooding – heatwaves seem to ‘just happen’ (in fact we may want some warmer weather), we soon forget them, we don’t realise the impact can be so serious, the responsibility for policy and communication is not so clear.
Yet in 2003 2,000 people in the UK died in heatwaves; a far greater number of tragic fatalities than in recent UK flooding.

We’ll share links to these research results when they are formally published.