Mar15 2011 0
The Trashcatchers Carnival which took place last summer in Tooting is one of four finalists shortlisted for Climate Week’s Best Event. 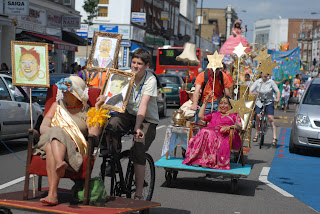 The Carnival was a vibrant and colourful event that used recycling as a metaphor to build a vision of a low-energy future for Tooting. It aimed to create beauty from rubbish, using story, art, science and celebration to tap into the collective ingenuity of local residents. Characters, sculptures, musical instruments, dance, performance, costumes and floats were all created using discarded materials such as plastic bags, bottles and boxes.

Produced by Transition Town Tooting in partnership with Phakama and Emergency Exit Arts, the Carnival was one of the most significant community events to take place in the Borough of Wandsworth in 2010 and had the support and participation of numerous schools, community groups and local organisations.
The community of Port Adelaide in Australia have been so inspired by this event that Transition Town Tooting and Phakama will be working with their local transition, waste, education, arts and environmental groups (by skype, facebook and social media) to connect up the two communities through the ‘Trashcatching’  concept of public celebration.

Climate Week is a national occasion that offers an annual renewal of our ambition and confidence to combat climate change. It is supported by every part of society – from the Prime Minister to Paul  McCartney, Vivienne Westwood to Manchester United, the CBI to Girlguiding UK. Its commercial partners are Tesco, Aviva, EDF  Energy, Kellogg’s and RBS.
“We are delighted to have been shortlisted for the Climate Week Best Event Award. The Trashcatchers Carnival was an inspirational project that enabled us to reimagine our relationship with our earth. We want to dedicate this to every single Trashcatchers Carnavalista and to the whole community of Tooting”.
Fabio Santos. Director of Phakama
and Lucy Neal. Co-Chair of Transition Town Tooting
The winner will be selected by a judging panel which includes Lord Nicholas Stern,  Met Office Chief Scientist Julia Slingo, environmentalist Tony Juniper, author Ian McEwan and Arnold Schwarzenegger’s climate  advisor, Terry Tamminen. It will be announced on 21st March at the official Climate Week launch  event at Lancaster House in Central London where the keynote speaker is Chris Huhne MP,  Secretary of State for Energy and Climate Change.