On Dec 1st, 100 participants from over 25 London Transition groups – and beyond – met at City Hall, by Tower Bridge on the Thames.
As well as meeting new people and following up links and ideas, we heard quick updates from 4 speakers:  on the London Low Carbon Communities Network, from two of London’s funded Low Carbon Zones, and from the founder of Project Dirt. All these talks mixed humour, honesty about mistakes and celebration of successes with encouragement for the rest of us in our diverse community projects.

The main part of the evening was led by Rob Hopkins, who founded the Transition Movement seven years ago. His new book ‘The Transition Companion’ has just been launched: developed over 2 years of listening to and collecting stories about many Transition groups. (Yes, there is a lot in the book about Transition Tooting…have a look!).

Rob facilitated the ‘audience’ to participate by exploring a new

Transition tool – a set of cards illustrating the 40-plus ‘Ingredients of Transition’ which groups are using to support their projects and communities – and which he describes in the new book.
Photo: Rob looks on as TTT’s ingedients are mapped by many hands using the picture cards
Different groups in the gathering used sets of these cards to look at their own activities, history and plans – laying them out on the floor as timelines, or as maps.
It was fun, and easier to do than to explain. We had great ‘show and tell’ discussions as we went round the room, seeing what sense different groups have made of the ingredients. 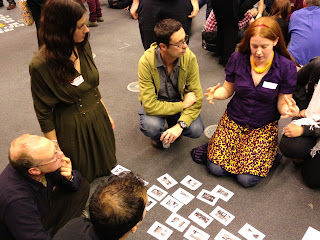 If you would like to know more about these ‘Ingredients of Transition’, have a look on line at http://www.transitionnetwork.org/ingredients