We’d like to share our responses to the Sunday 29th Climate Justice march in London, and to actions that replaced the banned march in Paris.
And we’d like to share news of the Transition Network day in Paris on Saturday 28th.
All these events and more are urgently linked with the COP21 Climate talks in Paris which are running until December 13th.

This is a snapshot of the experience we felt as participants….

What did taking part mean to us personally? 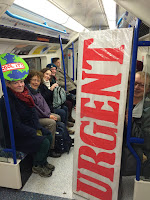 Hilary: It was hugely reassuring to see so many other people willing to give up a cold and windy day to marching

The march began, for us, at Tooting Bec Tube. We didn’t know how many would come, after putting out the invitation via our blog. On the day, 7 of us met, with the world on one head and giant sign saying, “urgent”.

We emerged in the centre of London and spotted one or two other likely groups – I guess this is how a march begins, with intentional meeting of friends and colleagues with a common cause. By the time we arrived at Park Lane, we realised that there were many common causes to put under the banner of “Climate March” – vegans, community energy, anti-oil, anti-fracking, save the polar bears, Greenpeace, revolutionaries, drummers, fundraisers and photographers…

We even had apples thrust until our palms from those campaigning against waste food! Delicious they were too.

6 of us from Tooting joined with 49,994 others from everywhere else, resolved to make our voices heard in London.

Hilary: I didn’t realise till afterwards how many others I knew were there as I spotted their twitter and Facebook posts – and found they must have been only yards from us on the day. 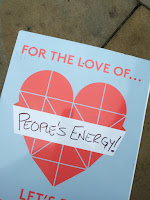 Richard: My experience of the march was one of carnival, as seen in the pictures, juxtaposed with serious energy and desire that COP21 negotiations will be a success.

In Paris the Sunday 29th march was banned and there were two alternatives that Charles joined:
“I’ll describe one which had a very personal impact.

In place of marching, last week the call went out for pairs of shoes to be donated and assembled in the Place de la République. 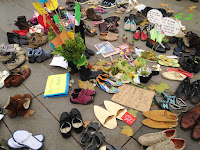 Pictures went around the world…gifts of empty shoes from France’s diverse cultures. They represented people denied a voice to meet make their points together about climate justice. 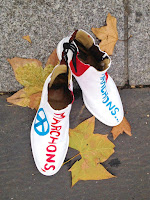 As well as being playful, the shoes had poignant associations of the debris and personal effects gathered after a disaster. A few hundred metres away the ad-hoc memorials to the Paris terrorist shootings look just like this.
I thought of the displays in prison camps… 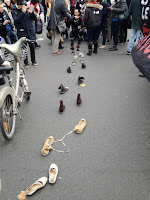 In the early afternoon passers-by began to shift the shoes, creating walking lines along the streets….“.

Whatever the personal purpose or impact of taking part in a public demonstration; we are used to being able to express ourselves. Plenty of people around the world do not have that agency and voice.