We are in the middle of an Anthropocene Mass Extinction so Rebellion feels one of the only solutions we have left. 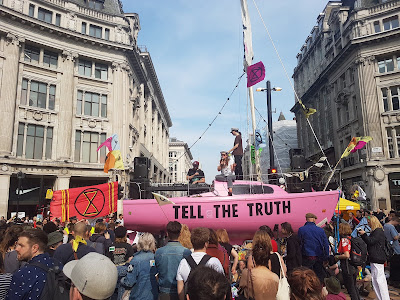 David took a tour of Extinction Rebellion on the streets of London on Thursday and offers a short story of personal encounters. Thank you to TTT for the space.

Arriving at Marble Arch to a solar powered music stage, a tent city, some fabulous posters and signs, it was great to see the street reclaimed. The freshness of the air was palpable, devoid as it was of the usual fossil-fuelled exhaust fumes. I took a leaflet from Jill who told me she joined an affinity group of organisers because she felt she needed to do something. At the induction centre Sam explained to me how to get involved, what activities could be arrestable or non-arrestable. She knows TTT’s Richard.

Walking down the middle of a car-free Oxford Street, I meet a slightly sunburnt policeman being berated by a Middle Eastern woman, demanding to know when he was going to clear up the protest. Her route to a hospital appointment was affected. The policeman calmly suggested she try the tube.  An aggressive bald white man joined in to have a go. This was affecting his van business – what was the officer going to do?  Our rosy-faced PC said “I’m just doing my job, maybe you would if your boss asked you?”  I tried to assist, to mediate, but both passers-by were too angry, too lost in themselves to engage. Avoiding eye contact they stormed off as the PC and I chatted on. 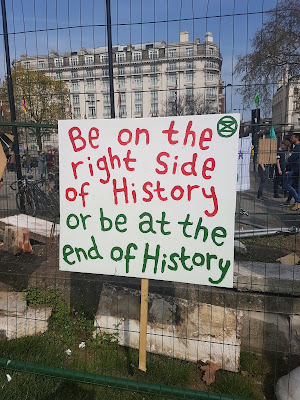 At Oxford Circus a magnificent pink boat dominated the intersection with brave activists aboard, variously attached within, beneath, around. I met Sarah, who was volunteering. She has been doing bird surveys in Oxfordshire over the last 10 years and is alarmed by the significant reduction is species sighted. 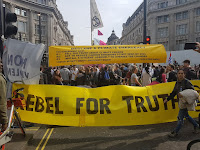 I overhear a policeman explaining the powers of Section 14 to a man in a priest’s habit. Broadly it gives police powers to ask people to move from certain designated spaces and arrest them if they refuse. I ask him what he thinks about the protest. He smiles but concedes he is not at liberty to give his own opinion. The stand off between police and protesters is tense but calm, a older lady vicar is marched past to the waiting vans.  Because Extinction Rebellion is non-violent, no alcohol, no drugs, it is harder to police I would say.

Sitting down by the well-being tent I meet Beth who asks me to write a message of hope to those attached to the pink boat. I make a little card with some inspring words, then lurk in the crowd to watch the delight of the activist who reads it and passes it on. Oh … my small act had meaning. While lending my pen to an Italian man so he too could write a note, a woman offers to wash my feet. I spare her the dubious pleasure.

I haul my wife out of her office and we go down via a closed off Piccadilly to Parliament Square, again successfully blockaded by small groups of dedicated activists in tents. We look up at someone slung in the tree high above, attached to a coffin, behind the Gandhi statue, and chat with West Indian Christian Laurence, who laughingly shares a nihilistic attitude to the climate chaos. In the middle of the road by Parliament, Rob is selling dump-on-Trump loo paper with the Donald’s face thereon, from a trolley, to raise money for his mental health charity. Another Rob stands adorned with signs urging action on plastics. He’s been coming from Redbridge every day for 8 weeks. Environment minister Claire Perry has hugged him and told him he is doing a good job. It is a pity the political system fails to allow Claire to do much to tackle the climate emergency, … to stop extinction.

Finally on, as the sun sets, to a colourfully chalked Waterloo Bridge, a veritable forest of trees, plants, a music stage, talks and singers, the smell of healthy food cooking, and meditating souls on the front line ready to be picked off one by one by the police. My last chat is with Judy from Edgware as we watch a Great Gusto-like singing group “climatise” the words to “Those Were The Days”. Judy is concerned about Palm Oil and is trying really hard to exclude it from the things she buys and uses. I make a mental note to do this if I can.

Jill, Sam, PC1, Sarah, PC2, Beth, the Italian, Laurence, Rob, Rob, Claire, Judy: they are all doing something. We can all do something to rebel against extinction. I highly recommend you visit Extinction Rebellion before it finishes.

I personally felt invigorated, inspired to do something myself and cycled back to Extinction Rebellion after my work on Friday, loving the clear less polluted streets, wanting to be part of something I believe in. Collecting a big bundle of flyers, I handed them out to members of the public, along the length of Oxford Street, while following a Carnival-like drumming procession.  I can’t wait for others to act, I have to do something myself.  After all …
IF NOT ME WHO? IF NOT NOW WHEN? 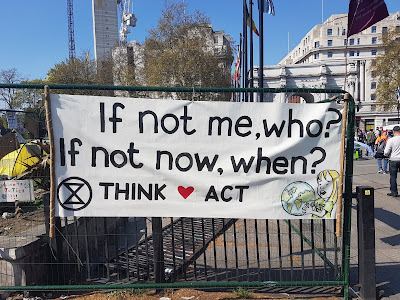