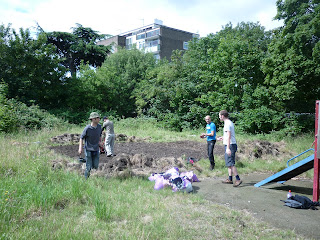 We have had an exciting few weeks at the Tooting Community Garden so here’s a little update on recent activities. On 18th and 19th June we invited volunteers to come to the Big Dig. We certainly have some talented gardeners and knowledgeable people in Tooting. Sharing skills and knowledge was a feature of the weekend. We began by preparing the rectangular bed in the middle of the garden so we can grow some veggies. Although we are a bit late in the season we are confident we can grow some produce in time for the Tooting Foodival in September. A few weeks previously we had been prepared to dig by hand but the soil was so compact that when we were offered use of a rotivator (thanks to the lovely people at Share Community Garden!) we accepted. Following rotivation we marked out beds with concrete slabs we found in the garden. After preparing the soil a little more and adding some compost we were ready to plant.
Seeds and carefully nurtured seedlings were brought along by volunteers and now we have rows of veg in place. Theses include tomatoes, beans, courgette, rocket, kohl rabi, nasturtiums and leaf beet. This was the big job of the weekend but we also made three compost bins from disused pallets (thanks Wimbledon Wickes!), cleared space for a seating area, collected manure (thanks Dean City Farm!), set up water butts and raided nearby skips for bits and pieces (thanks unknown Tooting residents!) that we can put to good use and keep them away from landfill. Thanks to everyone who came along and made it such a fun and productive weekend.

Another inspiring event this month was the Open Meeting and Tour of the Garden on 5th July. All week we had been praying for rain as the garden had been looking dry and the night that it decided to come, and torrentially at that, was Tuesday 5th July! So, thanks to the Christian Education Centre on Tooting Bec Road we had a warm and dry place to discuss ideas for the garden. We ended with a tour of the garden spent mostly hiding under the huge oak in the corner. In the early part of the evening we handed out plans of the garden and, in small groups, we depicted our visions for the land and how we could use it. We had a multitude of ideas including a living willow tepee, permaculture, hammocks, plant and animal study, yoga, skills courses, espalier fruit, colourful signs, aromatic herbs and plants and a wetland area. All very exciting ideas! However, we did all agree that we need to tread carefully and before we do much more we should conduct an audit of the garden so we know exactly what we have and need to preserve. It is important that we work with the existing ecosystems that have developed in an area of land that has been untouched for a few years. It was also agreed that we can use this rich variety of flora and fauna to learn more about our natural surroundings. Thanks to everyone who came along and contributed to a very interesting evening.

If you would like to get involved or hear about the garden more regularly please email me at abigailcallen@gmail.com to join the email list. Please visit our Facebook page to see lots of photos (taster below!) and ‘like’ it to show your support. You can find it here.