Our third post in response to the Climate march weekend, COP21 and Transition’s contribution

Thinking about impact and action – the global view

Paris
Charles: Another of the replacements for the banned Paris march was the ‘human chain’ – a line kilometres long where participants linked hands (for a short while…until the stewards said ‘C’est fini’ as the whole action was ad-hoc and not police-approved). 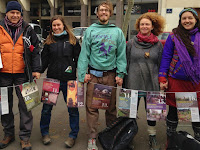 Here’s some of Transition links in the chain. We‘re holding copies of the pages of ’21 Histoires de Transition’, strung like bunting.

All along a street with several Metro stations – just like Balham to Tooting Broadway – there were theme clusters in the chain, where you could pop out of the Metro and group around global issues such as Energy, or Justice, or Nature, or Solutions.

There were other chains worldwide – including Brussels, just emerging from 4 days of public lock-down, and also replacing a banned march.
The chain was ephemeral but we still came together to witness what we wanted to express in the planned march...along with a few mexican waves.
Finally from Paris: two images from the Metro. The City of Paris filled the stations with motivational posters: yes very simple, but moving alongside the ads for Adele and Asus. Some private sector companies contributed too: here is Ben and Jerry’s offering a very strong message (more on their climate justice website – who knew?)“. 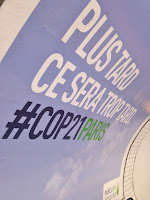 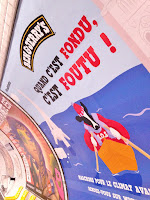 London
Hilary: On a global scale, it was great to return home and see all the pictures of marches around the world.

After a day of action before the London Climate March, it was clear we were one part of a common voice across the world. 785,000 people marched in 2300 events in 175 countries (Avaaz). From the vulnerable Pacific Islands to the so-called “developed” nations, the difference in context makes you realise how unified the people of the world are, and how we, as individuals, as communities and as a global population care about our future, and that of our children, not to mentioned the 1000s of species perishing along the way.

Its well worth having a look at the images from around the world, written up in Avaaz’s report here . They called it “The Largest Climate mobilisation in history”.

Globally, there are of course urgent challenges and campaigns which link us all, and link our wellbeing to our communities to the natural world and our activities on the planet.
Some of the resources we use to keep in touch with global and local progress are:

There are many more: 0ver 140 organisations are contributing to civil society climate-related actions in Paris.

We will look for an early opportunity to show the brand new film ‘Demain‘ (‘Tomorrow’), premiered last evening, in which 6 people in their 30s travel the world looking at creative sustainability solutions that are happening now.