I was reminded in Amsterdam recently, what a vast difference there is between cycling in the Dutch capital and cycling in London. 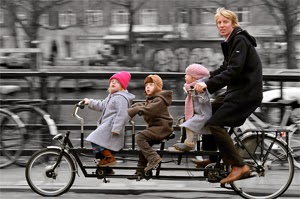 In central Amsterdam, bicycles and feet seem the primary mode of transport followed by trams. Far fewer cars, less pollution, a more pleasant environment and a slimmer looking population from this brief survey. There are many segregated lanes for bicycles, separate bike traffic signals, a generally friendly mixing of bikes and pedestrians and no helmets, not one, in sight.  Cycling is a pleasure not an ordeal.

Could London ever become this civilised?  Or must every journey involve a running of the gauntlet, sharing tiny spaces with huge vehicles, oblivious, aggressive or on the phone drivers coccooned in their metal boxes, cycle lanes that go nowhere etc?  As a daily cyclist, I can confirm it’s a jungle out there, even on the roads of Tooting and Balham which I use a lot.  You have to keep your wits about you to stay safe.  If only here was as cool and bike/people friendly as Amsterdam!

So what is going on in our local area?  Campaigner Jon Irwin has several petitions running on his traffik in tooting blog looking for support for trial changes to road layouts in Tooting and wider Wandsworth, and he’d welcome your support – all petitions here.  One idea I particularly like is making a section of the A24 between Tooting Bec and Balham a French style boulevard with segregation for cyclists and pedestrians.  “Balham Boulevard” apparently has some chance of success with interest from Council Transport lead Russell King and even a name check from Boris!  Jon adds: “The campaigns I’ve been running … have been incredibly well received. Do get in touch if you’d like to help out, I can only do this with local support”. Email Jon here

Meanwhile 20’s Plenty looks to implement a 20mph speed limit where people live.  I recently petitioned a Council meeting requesting this in my street.  Why not do the same for yours?  Already over 12m people live in local authority areas which are adopting this policy – why not round here too?  Despite Wandsworth Council never seeming keen on actually DOING anything in this area (better at talking), it’s up to us as individuals to keep applying pressure.  There is an election next year … politicians do seem to be interested in those.  DT