30 passionate Tooting folk came to The Selkirk (thanks so much Ben and the team!) on Wednesday night to join our 4 fantastic speakers, Kemi Akinola, Robert Biel, Robyn Knight and Sue Sheehan, in wrestling with the big dilemmas of sustainable food systems and what we can do locally. Our title was “Local Food is an Expensive Luxury” and the discussion was hosted by TTT’s co-founder Lucy Neal. If you’re interested in these gatherings, they’re part of our monthly Green Drinks at The Selkirk on the third Wednesday of every month, details HERE. 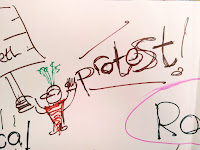 But what was it that contextualised food as “local”? Our first speaker, Sue Sheehan (Incredible Edible Lambeth) opened the account with the hyper local – food grown by you as being an active form of protest – claiming the land and building personal resilience for healthy, home grown, cheap veg and against the power of advertising and convenience, after all, gardening is the most “therapeutic and defiant act as you can do” according to the ultimate Guerrilla Gardener, Ron Finley, watch THIS and “plant some shit”. Switch to our second speaker, Dr Robert Biel, Senior lecturer at University College London and author of Sustainable Food Systems – the role of the city and we learn as recently as 1985, with population at 56 million, the UK produced 95% of its food from within its shores… a poignant and powerful statistic, particularly given the risk of a no deal Brexit and the threat that presents of us not being able to feed ourselves, which you can read more about in a recent article by Jay Rayner HERE.

Read on for LOADS more…

Zooming up a level, local food systems were championed as methods for plugging the leaky bucket of global finance – keep money circulating more locally through fresh fruit and veg and prepare food, cooked with love and shared in local eateries. Our third speaker, Robyn Knight joined us from Sutton Community Farm who supply 250 vegboxes to customers spread from Kingston to Greenwich. The Farm emphasises the social and environmental benefits of growing by engaging 1500 volunteers who benefit from exercise and socialising for increased wellbeing.

which brings us to our first major dilemma… MEASUREMENT AND  NARRATIVE.

Measuring impact in terms of monetary value alone compromises our ability to paint a more accurate picture of the role food plays in the beautiful complexity of life. And yet we’re required to do that to “make ends meet”, to be a “sustainable” business, to apply for and report back on funds. But how do we report back on the surrounding benefits, the positive impact on the wider community or even relieving pressure on the NHS through healthier, more active communities? Thinking beyond money, the language and metaphors become important, they can either “deliver us hope or foreclose possibility“, according to Robert Macfarlane, I’d much rather be opening the doors of possibility when ti comes to the future of food. The expense we talk about in the title of the debate could refer to the perceived prohibitively expensive farmers market produce, or could be juxtaposed next to the abundance of a well run allotment, garden, community garden or balcony, all requiring very little financial input, but a huge amount of time and love.

Back to the debate and Robert Biel went on to talk about luxury as short, sweet, quick hits designed to make us want more. Can luxury be re-framed as being long term and slow, with richer, deeper rewards going beyond $£$money as the only factor in our food choices? Can Community Supported Agriculture schemes and online services such as  Open Food Network transform our food growing systems (maybe a truly long and slow project)? Can we learn to embrace “surprise” gardening – working with natural systems, in all their mess and chaos (from a human point of view) to produce abundance? Agro-forestry, permaculture and agro-ecology come to mind. Plenty to connect with in terms of your practice of growing food and which systems you may want to invest in for the weekly shop.

This is all very well, but I was hugely grateful for the grounded view given by our fourth Speaker Kemi Akinola, founder of Be-Enriched and local Councillor (although she made clear the views she expressed were for the benefit of debate, the Devil’s Advocate had entered the room) and Co-Chair of both Lambeth food Partnership and Wandsworth food Partnership… Kemi gave a massive high five to Supermarkets, the way perhaps most of us shop for our food, for supplying consistently cheap, accessible food of huge variety and, in terms of the pressure on space in the urban landscape, super efficient. One shop does the lot. You can read more about the global food system HERE.

Which brought us to our second major dilemma – LAND.

In London particularly, land is seen as a driver for the housing crisis, and housing dominates conversation about land use in Town Halls across the Capital. Compare the use of land for food production against the use of land for a high density housing and you can see how challenging it is to fight for community gardens or inner city farms, in the context of the current capitalist regime. You only need to look across the Atlantic to see the effect of plummeting land value on opening up the possibilities for space use, let alone addressing urban food deserts which affect 26.5 million Americans, a staggering stat. Places like Chicago and Detroit, Michigan being recent examples of urban community farms re-valuing space for community benefit, addressing urban inequality and giving access to healthy food, community connection and exercise.

Back to London and the definition of local that ran throughout the conversation. Scale became important, thinking about the productivity of local growing and the value of peri-urban agriculture. Imagine if it was the norm that we knew exactly where the food we bought was grown and that place was just down the road? However, its not just about local food being grown close to us. Knowing more about the food we eat is key in our decision making as food consumers. Ethical and sustainable choices are hard to make and often are a challengeable viewpoint at best. Would you support small local businesses over a globalised meat-free diet? How would you decide between packaging free and high provenance food choices? The Supermarkets may work to a globalised, season-less standard, but at least most food products are fully labelled as to where the food originates, empowering the consumer to make an informed choice. Audience member Jenny Teasdale even cited that lamb from New Zealand had a smaller carbon footprint than lamb raised in the UK, there’s an interesting article HERE outlining some of the research supporting this argument, I’d heard the same about apples (ah yes, the year round crop… fresh breaburns in January anyone?).

Back to Tooting…  and we have just organised our 11th Annual Foodival, a celebration of what we can grow, cook and eat locally. David Thorne, one of the team of 5 who co-organise the event this year, reflected that this fundamental message behind Foodival was difficult to make stick with many of the 600 folks who attend. That’s not to belittle this fantastic event that brings all the communities of Tooting together in a spirit of celebration and food. Maybe some are just after a cheap plate of nosh.

This maybe a red herring and certainly harks back to Kemi’s point about Supermarkets. It wasn’t that long ago that Lidl and Aldi came over, offering substantially cheaper brands that we didn’t recognise and wonderfully random offers down at Lidl-de-Aldi-Lidl-Aldi-Lidl-de-Aldi dee. The reality of a lot of people’s lives right now is that the shopping needs to be quick, accessible, cheap. There are bellies to feed, demanding jobs to work and, some might say, equality to reach.

But does local and sustainable need to be expensive and inaccessible?

Our biggest dilemma of the night had entered the room… HOW DO YOU (S)MASH THE SYSTEM? 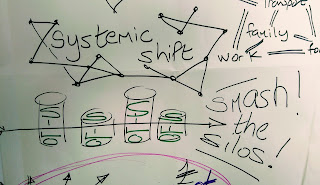 We’d talked a lot about being active, one of NEF’s 5 ways of wellbeing, and most of the room had in

some way taught or shared the joy of growing food with others. We’d talked about the multitude of benefits community gardening and local growing gives and the idea of communicating that, when measurement is challenging. And we’d shared another Foodival story of family food culture being expressed in a Top Tooting Cook entry using locally grown ingredients to make an award winning Indian dish – a true Tooting cultural mash-up. You could feel this sense of wanting to smash the silos and create a systemic shift towards true value beyond monetary cost, critically based in reality and meaningful for all.

Finally, lets unpack that word “value”. Perhaps this word pushes against the “luxury” of our title, encouraging us to think more in the longer term using regenerative, circular practices rather than linear, wasteful ones. Value as regenerative refers to the social, economic and environmental – we heard about the value of social interaction at Sutton Community Farm, mirrored at Community Farms and gardens across the Capital and beyond. We heard about the value of exercise and connection to nature, so powerful some Doctors prescribe it for to aid Patient recovery. We heard about the value of organic food practices for the Earth, re-building soil layers so depleted by intensive, industrial scale agriculture (we are literally running out of soil, some would argue). Finally, we heard about the value of local food and the systems that support it – farms, shops and customers – meaning that money becomes a bit more sticky to neighbourhoods, providing more opportunity to stabilise local economies. 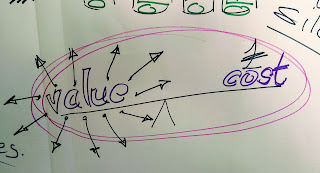 And perhaps that’s the challenge at the heart of the debate, for us all to enact change based on the wider value of food for us, our Communities, and our future food systems. Kemi, Sue, Robyn and Robert were asked for their call to action and here’s what they said…

Take responsibility in your choices, be informed and be active.
Simply eat more vegetables than you do now.
How are you spending your money? Spend it a bit more on food and bit less on stuff.
Where are the growing spaces? Get involved in creating and supporting more.
Work on the beautiful complexity by linking up social and environmental practice through projects.

And finally… here’s some additional resources passed on from Robyn and Kemi: